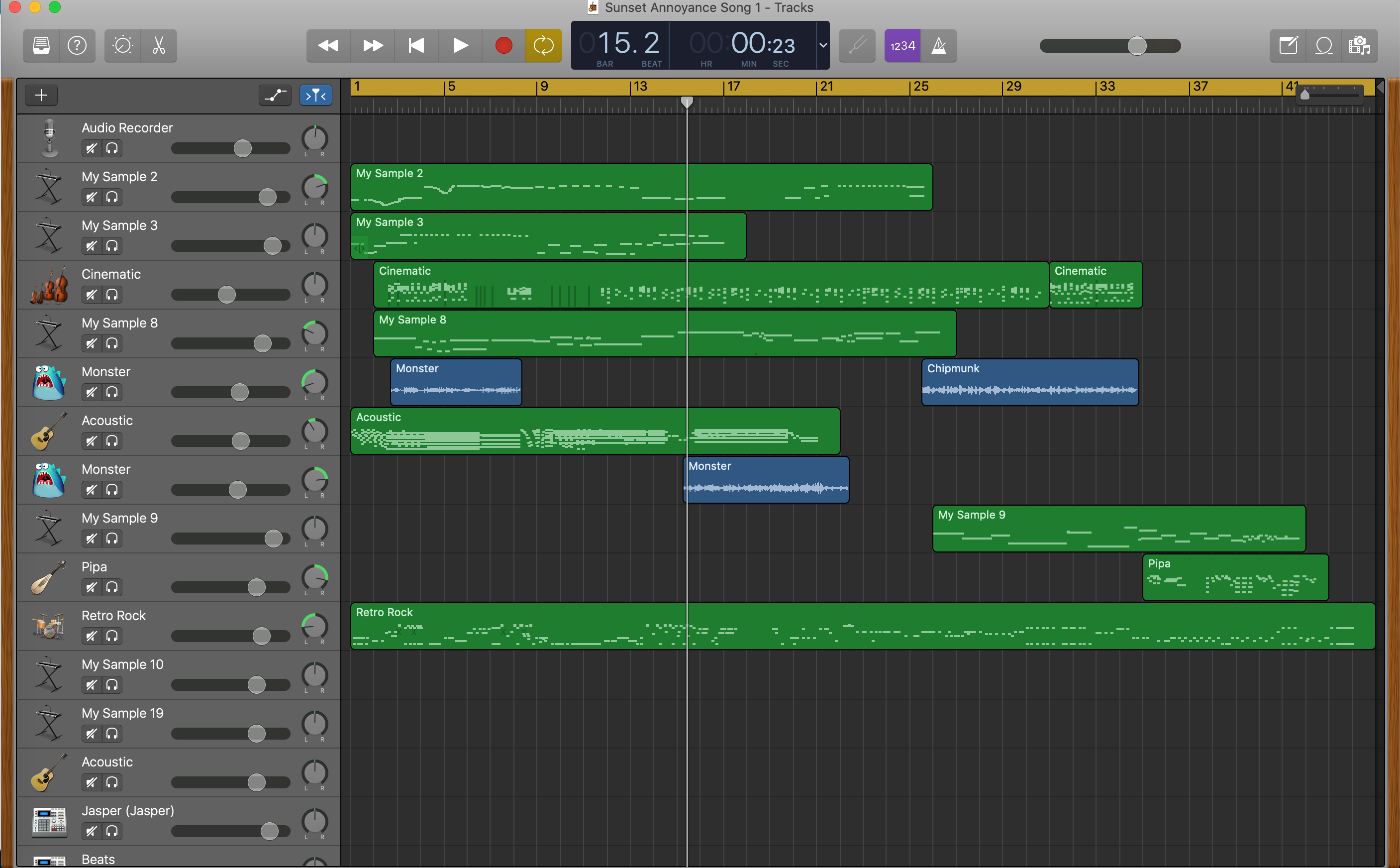 Rosalind has been working with GarageBand for a while now. She discovered it on the iPad a couple of years ago, and started by messing around with the sampler. She got a kick out of playing her voice samples on the virtual keyboard; making it fast and squeaky or low, slow and growly. Who doesn't, right? Then she discovered the virtual instruments, which are pretty cool in the iOs version. One can play individual notes, finger chords, and play preset harmonic progressions and arpeggios. There are interfaces in the form of guitar and violin-family string instruments with strings that one can slide along or bend with a finger. She also figured out - with a bare minimum of help - how to record separate tracks, and started adding instrumental parts to her sampled and recorded voices. The early experiments are collages of mayhem that are by turns intriguing, hysterically funny, and irritating, depending on one's frame of mind. Rosie certainly relishes the ridiculous humor in her work. She'll be poking at a GB project with headphones on, and all we hear is her laughing out loud non-stop.

The two pieces currently featured under the "Rosie's Work" tab are How to Annoy the Guys and Eesth Speagy. How to Annoy... is one of her more epic chaos collages. Eesth Speagy is something quite different. For this track Rosie made a voice sample, then composed a little riff on the sampler keyboard and practiced it.

She recorded the riff on one track using the sampled voice, then doubled it using an acoustic guitar sound. For the guitar part, Rosie had to play it by tapping on the guitar fingerboard on the screen. I offered some help by showing the notes on the fingerboard, then she practiced it on her own and recorded it. The last step was to record a vocal part using the the internal microphone on the iPad. Rosie did all this on her own. My only involvement, aside from showing her notes on the guitar, was to mix it a little bit; tweaking some levels and adjusting the pan on a couple of tracks to bring them out, and mastering. Rosie was really in charge of the mix as well. When I tried to bring up the non-sampled vocal on Eesth Speagy, she corrected me. I naturally thought of it as a "lead" vocal, but she wanted it to blend in with the texture, so I mixed it back in.

Both these compositions reference the Guys. The Guys are, collectively, all Rosie's stuffed toys. But to describe them as merely a collection of toys does them a grave injustice. They have a complex society, their own way of talking, and occasionally speak in their own language. There is much more to say about the Guys, and they will no doubt feature prominently in Rosie's work, Suffice to say for the moment that the voices in Eesth Speagy are examples of Guyspeak.